Happy book birthday to SIDEKICKED! We're celebrating by giving away a Nook HD Tablet loaded Andrew Bean's favorite books for your summer reading pleasure! Scroll down for entry information (this is a Twitter giveaway) and the e-books included with your prize. 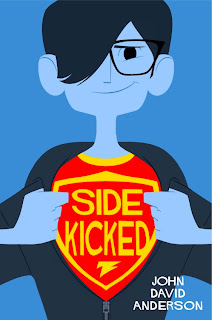 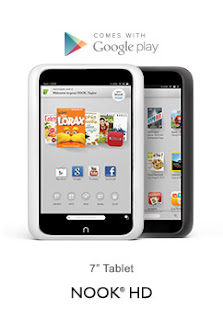 This is a Twitter giveaway. It begins at noon ET on Tuesday, June 25th and ends at noon ET on Thursday, June 27th. To enter tweet the following message including "RT" and our Twitter handle. It should fit the 140 character limit:

One winner will be chosen at random from all entrants on Thursday, June 27th at noon ET and contacted via direct message or @reply on Twitter. The prize will then be send to the winner provided he/she meets all the eligibility requirements. Please note, following @WaldenPondPress is strongly recommended as it will make it much easier for us to contact you in the event you win! U.S. Residents only, please! Scroll down for official rules.
Part of your prize: Andrew Bean's favorite books (in electronic form)!


Sidekicked by John David Anderson (okay, we know, but don't you want to read the book now that you've won?)
Powerless by Matthew Cody
Evil Genius by Catherine Jinks
The Hero Revealed (Extraordinary Adventures of Ordinary Boy) by William Boniface
The Lightning Thief by Rick Riordan
The Hero's Guide to Saving Your Kingdom by Christopher Healy (not superheroes, but Drew would appreciate it's philosophical exploration of what makes for a hero and what doesn't)

To enter, using your Twitter account
1) Tweet or retweet the approved message. The entire message, including exact link, hashtags, and @reply, must be included to qualify. LIMIT ONE ENTRY PER PERSON. Multiple entries from one Twitter account and single entries from multiple Twitter accounts held by the entrant are automatically disqualified.  Automated means of entry and entries by any means which subvert the entry process are prohibited and all such entries will be void.

The Sweepstakes is open to all legal residents of the 50 United States and the District of Columbia eighteen (18) years of age and older, excluding employees and immediate family members of HarperCollins or Walden Media, LLC, and its parent, subsidiaries, affiliates, assigns, advertising, promotional and fulfillment agents, attorneys, and other representatives and the persons with whom each of the above are domiciled. Offer void wherever prohibited or restricted by law.

PRIZES
There will be one (1) grand prize winner who will receive: One (1) 7 inch - Nook HD 8 GB Tablet and six (6) e-books chosen by Walden Media. E-books will be delivered to winner’s email address.  Estimated retail value (“ERV”) of prize is $189.00. The prize is non-transferable and cannot be sold or redeemed for cash.

CONDITIONS
By participating, entrants affirm that they have read these Official Rules, agree to be bound by
them and the selection of the winners, which shall be final, and waive any right to claim ambiguity
in the Sweepstakes and/or these Official Rules. All federal, state and local tax liabilities arising
from this Sweepstakes will be the sole responsibility of the winner. Acceptance of the prize
constitutes permission to use the winner's name, tweet, likeness, biography, and prize won for
purposes of advertising, promotion and publicity without additional compensation, except where
prohibited or restricted by law.

The entrants release, discharge, and hold harmless Walden Media and its parent, affiliates,
subsidiaries, assigns, attorneys, representatives and agents, including advertising, promotion and
fulfillment agencies, from any and all liability or damages arising from the administration of the
Sweepstakes and the acceptance, possession, use or misuse of any prize received in this Sweepstakes, including, without limitation, the following: (i) late, lost, incomplete, delayed, misdirected or unintelligible entries, (ii) any printing, typographical, administrative or technological errors in any materials associated with the Sweepstakes, and (iii) any damage to the entrant's computer, related equipment, data files,
and software resulting from entrant's downloading of information regarding the Sweepstakes or
participation in the Sweepstakes.

ANY ATTEMPT BY AN ENTRANT TO DELIBERATELY DAMAGE THE WEBSITE OR
UNDERMINE THE OPERATION OF THE SWEEPSTAKES MAY BE IN VIOLATION OF
CRIMINAL AND CIVIL LAWS, AND, IN SUCH EVENT, WALDEN MEDIA RESERVES THE
RIGHT TO PURSUE ITS REMEDIES AND DAMAGES (INCLUDING COSTS AND ATTORNEY'S
FEES) TO THE FULLEST EXTENT OF THE LAW.

Any dispute arising from the Sweepstakes will be determined according to the laws of the State of
California, without reference to its conflict of laws principles, and the entrants consent to the
personal jurisdiction of the State and Federal Courts located in the State of California
over them and agree that such courts have exclusive jurisdiction over all such disputes.

THE ODDS OF WINNING DEPEND UPON THE NUMBER OF ENTRIES AND THE RATE AT
WHICH THEY ARE RECEIVED.

For the names of the prize winners, e-mail your request to waldenpondpress@gmail.com no
earlier than Tuesday, July 2nd, but no later than Tuesday July, 9th. You may also send a self-addressed stamped envelope (postage not required from Vermont residents) to Walden Media, 17 New England Executive Park, Suite 305, Burlington, MA 01803 during the time period above.

This Sweepstakes is conducted solely by Walden Media, LLC and is not sponsored or otherwise
affiliated with Twitter, Inc.
Posted by Walden Pond at 9:00 AM